"So aside from the improvements in visuals and sound we also implemented a lot of things that make the game a lot more accessible to pretty much anybody" fortæller Oda. "The fact that we implemented this double gear system, we've implemented multiple difficulty modes, so you're able to really dive in and play the game the way that you see fit; there's not just one way to play the game. So it's really designed in a way that anybody can jump in."

"So with the double gear system I'll explain the speed gear first. So what this does is it's able to alter time and make the environments feel slower than they're actually going. What this really does is, if you're running up against a difficult obstacle, you're having trouble avoiding traps, or avoiding enemy fire, you can utilise this."

"The other component is the power gear. So what this does is it takes the Mega Buster, raises its power, but not only that, you're able to utilise it for other weapons and make them a lot stronger as well."

I think of dieting, then i eat pizza 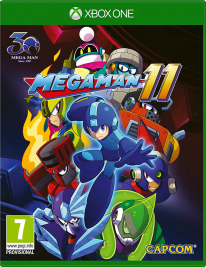