"There's a lot of different things that go into that philosophy," fortæller Robert Craig. "I'd say a really key one is we're trying to be as cinematic as possible. It's a big deal for us, it's one of our key tenets [...] one of the key things is the cinematography and the style we've put into it. I mean there's a number of things, it's really hard to pick one, but I'll kind of go for that one."

"We watched a lot of movie reference and we had a lot of influences and different things that go into it, but that's something that we tried to educate ourselves on and get better on for this, because it's so key for the delivery of the story. What I found interesting about working on a game like this is that the kind of camerawork, cinematography, lighting, that kind of thing - it's not just kind of like eye candy like it might be for some games. It's really key to how you as a player emotionally connect with the scenes, which actually influences your enjoyment of it, because we're asking you to make choices based on that, and if you don't care about it and you aren't connected to it, that will not feel very compelling. So we've really got to do that job with art to make people connect to it and kind of care about it, and then when they're gonna make those choices they're gonna feel a little bit more on the line."

"It can change an entire scene, when we've played scenes in the office," tilføjer James Scalpello. "Before it's been lit and we've played it we've gone 'oh, we don't know whether that's quite right", and then it's been lit and you've gone 'oh wow, that's totally changed the way I see that scene and the way I play it'. So it's absolutely key to how we make the games."

"You don't wanna throw away everything and start again. You want to keep the bits that work well and were successful, but then you want to build upon it and grow upon it and think what you can do better. One thing I really love about working in games is it's a very fast-moving technology, so new tools and new features are always becoming available to us as artists, that we can use to make the game better, so for Man of Medan we wanted to kind of capitalise on that and commit fully to the physically-based rendering workflow, so in the lighting for this one basically I tried to keep a tough ruleset on artists that all of the light is physically based, it's based on real-world values, it's based on captured skies, it's based on measured light, and that's always our jumping off point."

"And then to kind of match with that we look at actually the exposure on our cameras and get a real kind of photography feel. So we kind of treat it like a little virtual film set really. We've got our actors, our set, and then we're virtually setting up cameras and lights to get that film look to us, but we've really tried to look at the physicality of it as well, and try and make that as realistic as possible, which is really fun."

"A lot of thought went into that. So Until Dawn - what we basically tried to do with that one is, it all takes place in this one night, and you kind of arrive at this place and you're trapped, so we wanted that to feel inescapable," forklarer Craig. "It's dark, it's horrible, it's cold, so it gets to a certain place artistically and it holds you there, and then you get released from it at the end of the game, and that's a very deliberate choice to make it feel inescapable and kind of oppressive, right."

"Man of Medan's something totally different. It's got a pace to it and an adventure sort of feel to it that was really important to represent artistically. So what we did was we've actually chosen really carefully lots of different times of day that build up to the horror - it's a much slower burn. So we started off, as you say, with this tropical paradise. We went really warm, we tried to make it feel as welcoming as possible, and we gradually make our way towards this kind of cold, cinematic, moonlit feel by the time the characters are getting kidnapped, and that scene itself acts like a gear change in the art and the storytelling related to it."

The Dark Pictures - Man of Medan

The Dark Pictures - Man of Medan 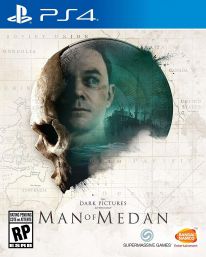