Sign up has been closed - Good luck at the tournament!

Transportation:
Contestants must pay for their own transportation to and from the qualifications and the local finals

Prizes:
1st place will among other things win a trip to the European finals in Paris.
There will also be other great prizes to win on top of the glory 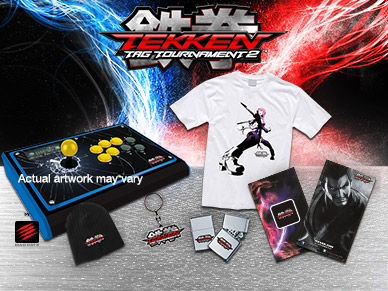 Questions:
If you have any questions regarding the tournament feel free to contact [email protected]

By entering the Namco Bandai Games Tekken Tag Tournament 2 Tournament you acknowledge the following terms and conditions and agree to adhere to the tournament rules:

2. You acknowledge that regional heats may be played on the pre-release version of the game and NOT the finished retail edition and you accept that this may restrict your desired button configuration prior to entering the tournament.

3. You agree to play regional heats using the demo pod units provided including the standard PS3 joypad or arcade stick. If you want to use an arcade stick you should bring you own. One cannot be provided for you at the event.

4. Custom arcade sticks can be used if the contestant brings it themselves. However under no circumstance may you use programmable controllers, macros, turbo, or any other features that automate any part of the game etc. Mapping the shoulder buttons on the standard PS3 joy pad is allowed

1. The Grand Finals will be held at Namco Station in Paris and will be played using the retail edition of Tekken Tag Tournament 2 on Playstation 3 - No tournament matches will be played on Xbox360 Format!

2. The final retail-edition will allow participants to configure buttons to their preferred settings prior to each match (but cannot be altered once a match has begun).

3. Competitors in the Grand Finals may choose to play rounds on their own pad if preferred, but agree that all equipment will be subject to inspection by Namco Bandai Games staff prior participation.

4. All Participants are responsible for their own equipment and neither Namco Bandai Games or Namco Station will be liable for any loss or damage to participant equipment.

2. Participants will proceed upon winning Matches.

3. Each Match of the tournament will be played to a best of three Fights.

4. Each Fight will be set to a best of three Rounds.

5. Participants that lose their Match will be eliminated from the tournament and can play no further part, regardless of forfeiture or abstention from other participants.

1. Namco Bandai Games Staff will endeavor to accommodate participants entering the tournament based on seeding conducted by Neo Empire events over the last 2 years.

2. Namco Bandai Staff will take into consideration contestants who have participated in other Beat-ëEm-Up events when allocating tournament starting positions.

3. By entering the tournament all participants accept the decision of Namco Bandai Staff as to their placement within tournament starting positions.

4. All un-seeded players will be allotted into the tournament brackets at random in accordance with time and order of registration.

1. Participants will be provided with a Fighter Number when entering the tournament together with a Tournament Card ñ this will allow you to track your progress in the Tournament.

2. Your name and fighter number will be clearly announced prior to each Match. It is the participants own responsibility to listen for his/her name.

3. Once called, a participant must make their way over to the announcing Namco Bandai Games Staff member who will assign a game pod and Player 1 / Player 2 position ñ You accept that the Namco Bandai Games staff decision on which pod is used and your playing position you are assigned is non-negotiable and final.

4. Once called, a participant will have 1 minute to get to their position to begin their Match. It is your responsibility to reach the sampling unit in time and Namco Bandai Games Staff will not leave the tournament unit to look for fighters.

5. Namco Bandai Games Staff reserve the right to forfeit the Match should participants not present themselves at the sampling unit after their name is called, regardless of any mitigating circumstances.

6. You will be allowed time to configure your control style at the demo station prior to your Match ñ It is your responsibility to make sure this is button configuration is correct and you will NOT be allowed to reconfigure once a Match has begun without forfeiting the Fight.

7. Tekken Tag Tournament 2 has a set period of time for participants to select a character ñ You must choose a character in this period or you will have to proceed with the default selection or forfeit the Fight.

8. Contestants may only change Characters after a lost Fight.

9. Winning contestants must proceed to the next Fight with the same character, you may not change your character based on the losing opponents new selection.

1. If any Namco Bandai Gamesí equipment fails during a Match you must alert a member of staff immediately.

2. Any failure from Namco Bandai Games equipment will result in the affected Fight being replayed.

3. Any failure from a contestants own equipment during the Grand Finals Event will result in the participant forfeiting the Fight ñ It is your own responsibility to ensure your own equipment is in good working order.

4. Namco Bandai Games Staff can provide participants with replacement PS3 Joypad at the Grand Finals to use should personally owned equipment fail during a Match, but accept no responsibility for replacing damaged joysticks.

1. By entering the tournament you accept that Namco Bandai Games Staff reserve the right to award Byes to further rounds, settle Tie-Breakers and administer Forfeits at their own discretion.

2. You also accept that Namco Bandai Games Staff decisions are final and failure to follow their directions can result in the forfeit of Fights or disqualification from the tournament.

1. If a participant presses PAUSE during a Fight they will immediately forfeit of the Round.

2. Namco Bandai Staff will not tolerate excuses attributed to mobile phone rings, itches, sneezes etc. and their decision is final.

3. If a participant wishes to change the configuration of their controller buttons once a Match has already begun they must forfeit the Fight.

4. If a contestant cannot be located after his name and fight number has been called he/she will automatically forfeit the Match.

5. Any participant deliberately attempting to sabotage or damage Namco Bandai Gamesí equipment to restart matches will be immediately disqualified from the tournament.

6. Any persons who attempt to disrupt Matches with verbal or physical abuse of Namco Bandai Games Staff or Tournament Competitors will be disqualified from the tournament and may be removed from the venue.

7. Refusal to play a Fight or committing any disruptive behavior that can delay the tournament will result in forfeiture of the Match regardless of contestant tournament standings.

1. By participating in a Namco Bandai Gamesí Event (tournament, casual or otherwise), you agree to partake in promotional activities that may include having your photo taken.

1. Any tournament winner or runner-up that refuses to have their picture taken, loses any rights to titles and/or prizes.

1. Namco Bandai Games are not responsible for your travel to the Grand Final or your accommodation during its run. You acknowledge it is your own responsibility to get to the final event at Namco Station.

1. If a participant decides to abstain from the tournament Grand Finals, Namco Bandai Games reserve the right to replace them with a suitable contestant or award another participant a bye at their discretion.

1. It is a fundamental rule of participation in all Namco Bandai Games events that actions which are, or are deemed to be, collaborative, or indicative of complicit or explicit collusion of any form, may result in the direct expulsion and/or exclusion of the offender (s) from the event in progress, and also of any such subsequent events, as determined by Namco Bandai Games Staff.

1. For these purposes, "collusion" is defined as: Knowingly or willingly manipulating the outcome of any particular game/contest, in order to bring about a desired effect that may be directly or indirectly beneficial to yourself and/or to any other parties present. An example of such an act is deliberately losing a fight in order to confer an advantage upon another participant.

1. If action is taken by the management as a result of individual (s) being deemed to engage in the aforementioned activities, the management's decision will be absolutely binding and final in this matter. No further correspondence may be entered into, unless at the direct discretion of the tournament director.

1. Participants should also be aware that any activities falling under this definition will result in a direct forfeit of eligibility for any awards and/or prizes due.

1. Your co-operation in this matter is greatly appreciated. If you are in any doubt regarding this rule, please speak directly with the management before entering a tournament, to ensure you fully understand what is required of you.

1. These rules exist in order to protect the integrity and fairness of Namco Bandai Games events.

1. Please note that in exceptional circumstances, the tournament rules may be subject to change at short notice. In the event of such a change, the tournament director and/or management will make every effort to make participants aware of this fact as soon as possible.

1. We also reserve the right to eject any participant who, in our opinion, is detrimental to, and/or is having a negative impact on the event. The management's decision on all matters is absolute and binding. 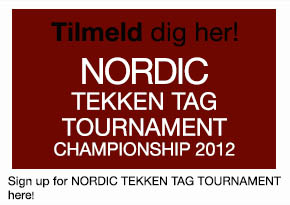